The Story of my Experiments with Truth is an autobiography written by Mahatma Gandhi and chronicles his life from childhood until 1921. The book is one of the most read ‘Gandhian books’ since being published in 1927 and has been translated to a couple of different languages. Around the year 1999, the book was part of a list of top 100 spiritual books of the 20th century.

I am not a Gandhi fan, per se. However, I do believe in some of his ideals and principles which compelled me to read this book. So, let me present to you some of the quotes from the book based on my personal liking….. 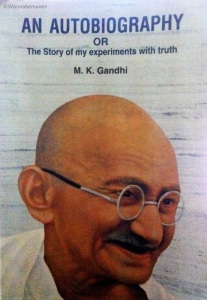 My Experiments with Truth – Mahatma Gandhi

Well, these are my preferences. If you loved any of his quotes from the book, not mentioned here, feel free to use the comment box and enlighten me 🙂

What I write about…

My bookshelf on Goodreads

© Wannabemaven, 2014. Unauthorized use and/or duplication of the content on this blog without express and written permission from this blog’s author - Edwina D'souza (that is Me) and/or owner (that again is Me) is strictly prohibited. Excerpts and links may be used, provided that full and clear credit is given to Wannabemaven or Edwina D'souza with appropriate and specific direction to this website. As much as Bloggers/Authors love their content to be a point of reference or source of inspiration, we hate Plagiarism!!

Find me on Blog Directories